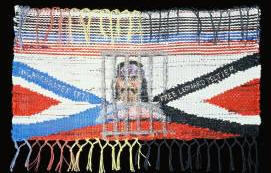 Description of Artwork: Morris County officials removed two of Grauer's works, Free Mumia Abu Jamal and Free Leonard Peltier. Both pieces are woven with plastic bags cut into strips on a four-harness floor loom. The images are painted on the surface with acrylic paint.

According to the show's curator and Art in the Atrium co-founder, Viki Craig, a particular objection came from the Morris County Prosecutor Michael M. Rubbinaccio who was angered by the placement of the controversial works across from his office. Rubbinaccio has denied having any involvement in the removal of the works, but County representatives concede that the works were removed by employees at the direction of at least one County official.

Results of Incident: Grauer filed a Federal lawsuit in Newark stating that her First Amendment rights were violated by the removal of the works from the exhibition. "Art is a form of expression," she contended. Before the case was heard, Morris County officials agreed to re-hang Ms. Grauer's artworks in the public exhibit.

The works were reinstalled but the County has yet to apologize to Ms. Grauer or to the public for interfering with the exhibit.

According to the artist, some County officials have threatened further infringements on artists' free expression of ideas ranging from discontinuation of the annual Black History Month show, to hiring a full-time censor, to closing the public gallery all together.

In 2008 Art in the Atrium officials paid closer attention to the selected work - two pieces featuring nudity were voluntarily withdrawn from the annual African-American exhibit.