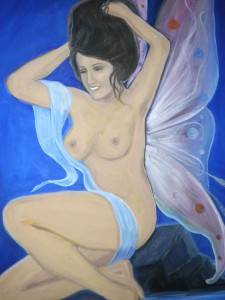 Description of Artwork: Rose Loya submitted a painting for the Inland Empire Latino Art Association exhibit at the Norman F. Feldheym Central Library in San Bernardino, California. Her painting depicted a female fairy smiling and mussing her hair. The fairy was wrapped in a diaphanous cloth that did not cover her breasts.

The Incident: The Library initially removed the painting from the exhibit due to its depiction of nudity. In response to a letter from the National Coalition Against Censorship, Deputy City Attorney Steven Graham stated the painting had been removed in order "to maintain an inclusive atmosphere where all members of the public, including parents of young children and Library staff, should feel comfortable."

Results of Incident: After pressure from free speech organizations, Deputy City Attorney Steven Graham responded, "...in consideration of the Library’s commitment to protection of freedom of speech, out of a desire to avoid the expense of litigation to ensure that the Library’s already limited funds are not wasted unnecessarily, and without admitting any wrongdoing, the Library agrees to allow the painting to rejoin the other paintings for the remainder of the exhibit.”

The painting was returned to the exhibit, and with the artist's consent, placed on the second story of the library.