Location: All of Scandinavia, England, Spain, Russia and later the Soviet Union 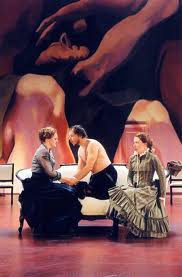 Description of Artwork: Ghosts, 1890: Drama, one of the most important of the author's realistic period. Its protagonist, the widowed Mrs. Alving has used her energies to suppress the truth about her profligate husband. The play's crisis is provoked by the return from Paris of her son, Oswald, suffering not from consumption but from syphilis, derived from his father. Although the play deals with such taboo subjects as incest and euthanasia, it is chiefly about the death conventions that smother a society's vitality.

The Incident: 1881, Norway, the play was published but caused such an international scandal that no established theater in Scandinavia would dare produce it. 1890, St. Petersburg, the Church had the play banned. 1892, England, the application for a licence was refused by the Lord Chamberlain. 1939, Spain, the work was purged by the Franco Government.