Holier Than Thou (sculpture) 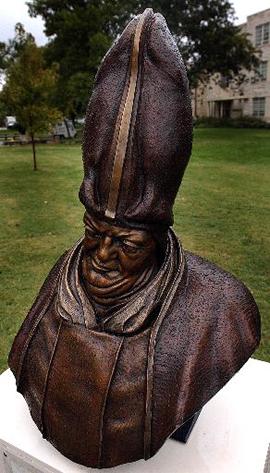 Description of Artwork: The sculpture is a bronze bust of a bishop, wearing a miter which some have argued resembles a phallus.

The Incident: The statue was chosen as a part of the annual Washburn University Outdoor Art Exhibition to be on campus for the 2003-2004 school year. Shortly after it was erected, Biology Professor Thomas O'Connor and student Andrew Strobl took offense at what they perceived were anti-Catholic sentiments imbued into the work, and sued the school under the argument that the school was state-sponsored, and putting up the artwork constituted a disapproval of the Catholic faith.

Results of Incident: "The court concluded that neither the purpose nor the effect of displaying the sculpture was to spread an anti-Catholic sentiment. The court went on to say that, viewed in context with the other sculptures displayed on campus, 'any reasonable observer... would understand the university had not endorsed that message.'" [1]