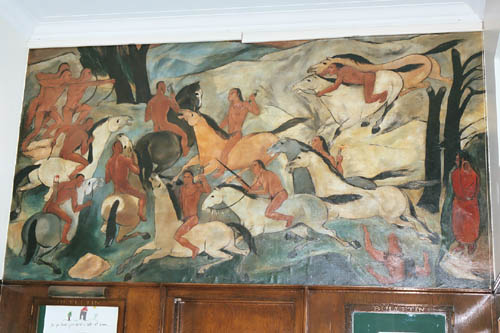 Description of Artwork: Illini and Potowatomies Struggle at Starved Rock, 1941-42 was commissioned from the artist for $700. The mural depicts 14 Indians in battle, "some on horseback, some are on foot, most are either buck naked or scantily clad in leafy G-strings." (Tribune)

The Incident: Janitor John Swartz filed a complaint under the Equal Opportunity Act, citing a section that prohibits sexual harassment in the work place. In his complaint, Swartz asked only that the alleged bare body parts be painted over with appropriate Indian clothing. When Mahnich, his supervisor, rejected his intial complaint, Swartz appealed to higher authority. At first, higher authority appeared unimpressed, but one day an order came down from Washington to cover the painting. Current Oglesby Policy is to keep the blinds down unless a postal patron requests a peep, which is happening with increasing frequency, Mahnich said. Piecha, a retired state maintenance worker, has gathered 1,300 signatures on a petition calling for it to be bared for all time... Along with gathering names on the petition, Piecha has solicited and received letters of support from groups such as the Illinois State Council of the Knights of Columbus and the Oglesby American Legion, Thomas Larkin Post 237.

Results of Incident: The painting was covered over during the investigation. Les Matanic, manager of post office operations for the central Illinois district, personally inspected the artwork. After consideration, the mural was again put on public display. The mural is currently on display during hours the post office lobby is open.