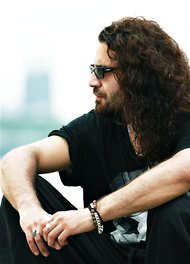 Description of Artwork: "In his song, Mr. Najafi asks for Imam Naghi to return instead of the 12th imam, the Shiite messiah. He cynically raps that Iranians are ready to sacrifice themselves with the imam’s help to solve problems like 'shallow slogans' and 'Chinese-made prayer rugs.' The song is laden with rough street language." [1]

The Incident: After the song was released, Ayatollah Lotfollah Safi-Golpayegani announced a fatwa (or, call for religious execution) on Shahin Najafi, saying that he insulted Islam. Shortly thereafter, an anonymous patron of shia-online.ir announced a $100,000 bounty on the artist's head.

Results of Incident: Shahin Najafi is in hiding in an undisclosed location in Germany. He insists that his songs were not insulting to Islam.