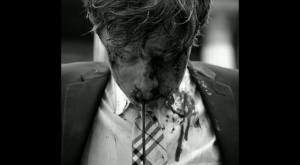 Description of Artwork: Indochine, a French band popular since the 1980's, released a song called "College Boy" with themes surrounding violence and bullying within schools. Acclaimed Quebecois director Xavier Dolan directed a music video for the song, released in early May 2013. In the video, a boy is bullied and then violently crucified and shot at his school. The depictions of violence are increasingly disturbing.

At first, the boy sits in class and has balled up paper thrown at him. He then returns home where his family appears oblivious to his dejected demeanor and laugh heartily as he sits beside them at the dinner table. When he returns to school, he is surrounded in the bathroom, thrown out into a central courtyard and beat up by his classmates. They proceed to urinate on his face as he protests. The situation escalates as they bring in a piece of wood and hammer his wrists to it with a large hammer and nails. He is raised onto a crucifix and his classmates pull out a variety of guns and begin to shoot him in the chest and stomach. The rest of the students are blindfolded and hold up their cellphones, filming the violent proceedings. The police show up and are made to believe they should attack the bullied child rather than the bullies themselves; they shoot him with their tasers while blindfolded, too. The video ends as the boy looks down at the camera and says what sounds like, "Merci," or "Please."

The extreme violence appears purposeful, escalating into territory where one might not expect it to precisely to indicate the horrors that bullying presents for students in school these days. The blindfolded children, police, and other school officials are representative of the blind eye turned to bullies and bullying. The religious symbolism could be used to imagine the martyrdom that comes from bullying situations, with one student taking the brunt of the abuse while the other look on or blindly go through their own days.

The video is filmed in black and white and contains many slow motion tracking shots. There is a poetic, melodic, and melancholy quality to it, rather than one of excess.

The Incident: The music video for "College Boy" is being censored in France and Canada.

MusiquePlus, a Quebecois cable music channel aimed at a young listening audience, has refused to air the music video.

The Conseil Supérieur de l’Audiovisuel (CSA) in France has banned the music video during daytime viewing hours in the hopes of keeping children from viewing the content. Francoise Laborde, a CSA representative, said that “Since it is extremely violent, it can’t be broadcast on satellite TV. At a minimum, it should be banned for anyone under 16 years of age, and maybe even 18."

The Council reported on May 7th that "...in the state of the law, did not fall into their skills in audiovisual broadcasts and audiovisual media services on demand channels," presumably referencing an inability to keep paid-cable television channels from airing the video. The Council did refer to "Article 1 of the Law of 30 September 1986" which states that "fundamental principles as respect for human dignity and the protection of childhood and adolescence" should be maintained by electronic communication of any kind.

Results of Incident: The results of this incident are inconclusive. Presumably, the French and Quebecois government cannot keep on-demand television channels from airing the music video, however, it is likely that French broadcasting has censored the video during daytime hours as they said they would.

There are blog reports of censorship on YouTube in Quebec and possibly France, with one writer stating that "The clip has already been censored in France. In fact, it’s even censored on YouTube here. You go to the clip, it begins and then it abruptly cuts and switches to a video of Indochine performing the song."