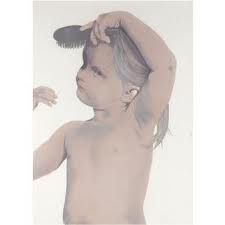 Description of Artwork: Nude photographs of the artist's children and other chldren. Paintings based on these photographs.

The Incident: An investigation of Kiki Lamers and Louis Thijessen began when a photo-developer alerted the police of "abnormal" negatives. In 2004 they were sentenced to 8 months in jail and fined 5,000 Euro, Lamers for the "corruption of a minor younger than 15" and Thijssen for the concealment of child pornography and complicity in the corruption of children.

Results of Incident: The case is under appeal - the appeals court is making a difference between the art photos and the images Thijssen downloaded on the Internet (by error, he claims). Lamers no longer photographs her son nude.