Artist: Nan Goldin (photograph was in the collection of Elton John) 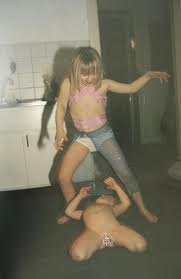 Description of Artwork: The photograph, entitled Klara And Edda Belly-Dancing (1998), shows two naked girls laughing and playing. One is wrapped in costume fabric and the other is lying on her back, her knees bent under her. It is one of 149 images comprising the Thanksgiving installation by renowned US photographer Nan Goldin. The photograph exists as part of the installation as a whole and has been widely published and exhibited throughout the world. It can be found in the monograph of Goldin's works entitled The Devil's Playground (Phaidon, 2003), has been offered for sale at Sotheby's New York in 2002 and 2004, and has previously been exhibited in Houston, London, Madrid, New York, Portugal, Warsaw and Zurich.

The Incident: An administrator at the Baltic arts centre, concerned that the work might be against the law, called in police. Officers removed the exhibit from the gallery the day before the exhibition opened. It was examined by Northumbria Police to see if it breached pornography legislation.

Results of Incident: The police investigated the circumstances around the production and ownership of the image. The case was dropped as there was insufficient evidence to justify proceedings. The photograph had already been investigated in 2001 when it was part of another exhibition at the Saatchi gallery in London and was found to not be indecent.

Source: The Daily Mail, The Telegraph