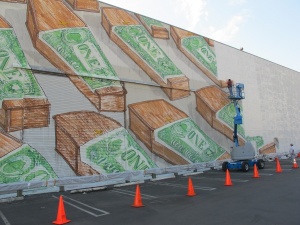 Description of Artwork: An anti-war mural was painted by the Italian street artist Blu on a wall of the Geffen Contemporary building which featured military-style coffins draped in dollar bills rather than flags.

The Incident: MOCA had commissioned Blu to paint a mural as a part of its "Art in the Streets" exhibition. The museum did not receive a proposal from Blu prior to starting the work and upon seeing it, MOCA director Jeffrey Deitch said that the mural was insensitive to a neighborhood that includes a Veterans Affairs hospital and a war memorial to Japanese American soldiers.

Results of Incident: MOCA director Jeffrey Deitch ordered a whitewash of the mural.