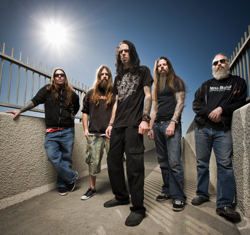 Description of Artwork: "Lamb of God" is a popular metal band, that has toured with such bands as Metallica and Slipknot. They were formed in 1990 under the name "Burn the Priest," but changed their name in 2000.

The Incident: Lamb of God was set to perform with Slipknot at the L.A. Forum, a venue which is owned by the Faithful Central Bible Church. Leaders of their congregation, however, assumed from the band's previous name that Lamb of God was a satanic metal band, and banned them from performing there.

Results of Incident: Lamb of God moved their performances for those two nights to the Glasshouse Pavilion in Pomona, which is a smaller venue.

In 2010, Lamb of God was yet again banned from performing at the Forum, this time with Metallica as the band they were touring with.