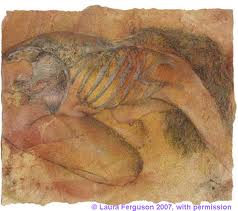 Description of Artwork: Ferguson's paintings depict nude female bodies with their skeletal systems showing through. The artist's work is an attempt to deal with her own disability: scoliosis, a curvature of the spine. Ferguson draws her own body's skeletal system (based on X rays, MRIs and 3D scans) on paper previously treated with oil paints and bronze powders. None of the censored paintings contained full frontal nudity. 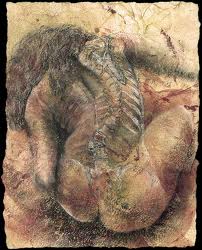 The Incident: The American Academy of Orthopaedic Surgeons organized a large-scale traveling exhibition, which included works by artists with orthopaedic conditions. A selection of works was to be displayed in the rotunda of the Senate Office Building in D.C. A number of Ferguson's paintings, which had also been featured on the exhibition's publicity materials, were among those selected. The Senate Rules Committee rejected Ferguson's art claiming, initially and officially, that there wasn't enough space. Eventually, Tamara Somerville, staff director for Senate Rules Committee Chairman Mitch McConnell (R-Ky.) admitted that Ferguson's paintings were censored because they featured nudity.

Results of Incident: The AAOS removed the exhibit from the Senate in its entirety and found an alternative venue for it: Southwest Washington's Millennium Arts Center.