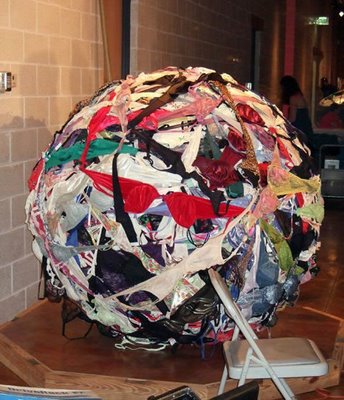 Description of Artwork: Lane's sculpture is a 300-lb, 12-by-9 foot model of a vulva. It has a steel frame and is upholstered in red and purple velvet. Another sculpture in the exhibit was a giant ball of bras called the Braball.

The Incident: The vulva and Braball were part of an exhibit that accompanied the performance of Eve Ensler's The Vagina Monologues at the Masonic Auditorium in Nob's Hill. After objections from the Masonic hall's management, the vulva and Braball were covered with sheets and only allowed to show during the evening of the performance. Chris Carpenter told Lane and the event coordinator, Melissa Howden, that he did not want to recieve complaints from other guests, the general public and a school across the street from the auditorium.

Results of Incident: Though Howden and Lane disagreed with the covering of the sculpture's, they respected Carpenter's decision.