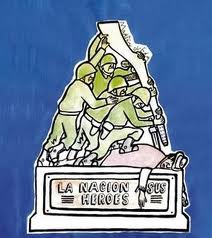 Description of Artwork: Three drawings were removed, including a drawing that criticized the military for massacres of highland peasants and depicts four soldiers planting a rifle with a bayonet into the back of a peasant - an image mimicking the iconic World War II photograph of US Marines raising the American flag over Iwo Jima.

The other two drawings removed poked fun at the wave of privatizations that swept Latin America in the 1990s, as well as Garcia and his predecessor, Alejandro Toledo.

The Incident: Officials at a government-funded gallery removed three of Quijano's works, including the drawings described above. Quijano told the Associated Press that he felt like officials from the National Institute of Culture "went over my head" and that this was a "clear" violation of freedom of expression.

The cartoon, which was also featured on a large banner in the museum before that, too, was removed, was originally published in the newspaper Peru21 in 2003, ahead of a truth commission report on 20 years of violence during the rebellion by Maoist Shining Path rebels. Government security forces were blamed for some of the worst massacres of the insurgency, including the August 1985 killing of nearly 70 peasants in the rural village of Accomarca.

Peru21 reported that Quijano's work was removed after the gallery received a letter of complaint from the military, which it has admitted to sending.

Results of Incident: In protest, Quijano removed his entire 90-piece show Monday June 25, 2007 from the gallery where it was to run for a month. The gallery's director resigned in solidarity.