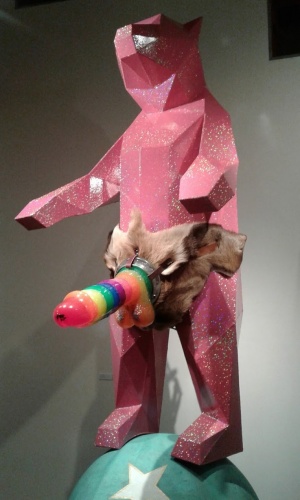 Wade Folger MacDonald proposed a show of Anderson Ranch former residents to be co-curated by himself and Julie Malen at the Anderson Ranch Arts Center in Snowmass Colorado in June of 2016. The show was accepted by Jose Ferreira, the sculpture director at Anderson Ranch. Of the 14 artists invited, 10 accepted the invitation to show.

The artists worked in a diverse range of styles and mediums. Brie Ruais' work involved a video recording from the ceiling. She performed a piece by spreading clay out on the ground in the nude. The vantage point of the camera view was such that only her back was exposed to the audience.

The Incident: The Center censored work they deemed innapropriate for their audience. The group exhibition in the Patton Mallot Gallery at Anderson Ranch was to include the work of Brie Ruais. Her work involved a video recording from the ceiling to view what she was doing on the ground. Brie performed a piece by spreading clay out on the ground in the nude. The nature of this camera view exposed only her back to the audience. Brie's work was taken out of the exhibition because of a child protection policy which was written in the resident handbook. this frustrated and disturbed many of the artists as they did not receive any information telling them what was or was not appropriate for the exhibition, rather the work was taken out without any explanation.

All of the artists were required to sign a gallery agreement. In this agreement there is no mention of nudity or a child protection policy whatsoever, and nothing that says what is or isn't appropriate for the Paton Mallot Gallery.

The reason for removing Bries work was that of a child protection policy that is written in the resident handbook. That information was not provided as part of the gallery's rules during the vetting of work selected for the show. All of the artists in the show were very upset/confused and want to do something about it. The ranch should be clear about these things for future exhibitions providing all of the information required to make the kind of call about removing work. They later made a statement to all staff at Anderson Ranch, after some buzz on the matter of censorship, that the decision to remove Brie Ruais's work from the show was a curatorial decision.

John Emerson's sculpture 'Pokey the Bear' was also singled out. The artist was told the sculpture could be shown in the gallery but not in it's entirety. The sculpture is a large steel pink bear that stands on a concrete blue ball and wears a furry strap and harness with a large urethane rainbow dildo. The dildo/strap was not to be included for the show. However, the artist decided to attach the strap four days after the show opened in order to take some photos. At the time, the ranch property was closed to all visitors and only open to staff. The artist then posted pictures of the piece in its entirety on facebook, where other images of his piece were posted, but not in context of the show at the ranch.

Results of Incident: Emerson and his wife, who were employed at the ranch, were terminated soon afterwards.

Image of John Emerson's 'Pokey the Bear' courtesy the artist.