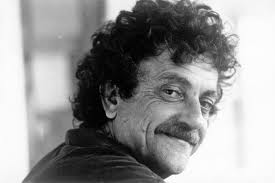 Confronting Bodies: Drake Board of Education

Description of Artwork: Kurt Vonnegut's novel, Slaughterhouse Five, was created from his experiences during WW II. The novel takes place during "..what he believes to have been 11 days, he wandered around as an infantry scout, improvising his own tactics (all his training had been in artillery), not knowing where the lines were or whether there were any lines, and living with death in a cartoonic embrace. As a groggy war prisoner he witnessed the bombing of Dresden, 'a terrible thing for the son of an architect to see'." (Wilford Sheed, The Now Generation Knew Him When, 9-12-69, pg. C9)

The Incident: Bruce Severy, an English teacher at Drake High School in North Dakota, ordered Slaughterhouse Five for one of his classes. "On 7 November (1973), Mrs. Sheldon Summers, school custodian, burned 32 copies of the book because the board members had decided that it was pornographic." (Modern Fiction Studies, Kurt Vonnegut on Censorship and Moral Values, Vol. 26. Iss. 4. 1981, pg. 683)

Results of Incident: The Board of Education did not reconsider its actions.