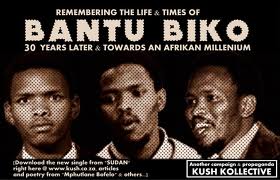 Description of Artwork: Biko was a pioneer in the South African black power movement. He edited Black Viewpoint, and wrote numerous articles to encourage black liberation. Biko was also a founding member of the Black Conciousness Movement (BCM) and the South African Students Organization.

The Incident: The BCM began in the 1960s after the government banned all progressive organizations. Biko himself was forbidden from publishing and organizing black community programs. The censor did not stop him from editing Black Review, by listing a man named Ben Khoapa as the editor. He was banned by the apartheid regime in February 1973, meaning that he was not allowed to speak to more than one person at a time nor to speak in public, was restricted to the King William's Town magisterial district (his home area), and could not write publicly or speak with the media. Biko violated the ban by returning to Cape Town in 1977. He was arrested, tortured and died in police custody.

Results of Incident: BCM literature and activists were banned and detained following Biko's death. The five police officers responsible for his interrogation and death were denied amnesty by the Truth and Reconciliation Commission in 1997. In 2003 the South African Justice Ministry announced that the five policemen accused of killing Biko would not be prosecuted because there was insufficient evidence and because the time limit for prosecution had elapsed.