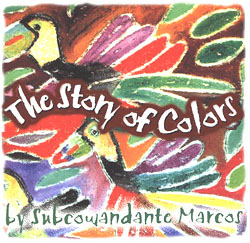 Description of Artwork: The Story of Colors (La Historia de los Colores) is a children's book written by Subcomandante Marcos of the Zapatista Army of National Liberation published in 1996.

The Incident: The National Endowment of the Arts cancelled grant money for an illustrated bilingual edition in both Spanish and English because of the author's political affiliations, despite assurances on the part of the publisher that the grant money would not go to the author or the organizations he supports.

Results of Incident: NCAC, the American Booksellers Foundation for Free Expression, the American Civil Liberties Union, the Freedom to Read Foundation and the PEN American Center co-signed a letter to the NEA condemning their actions. The Lannan Foundation stepped in with support after the NEA withdrew. The bilingual version was published in 1999, translated by Anne Bar Din with illustrations by Domitilia Dominguez.