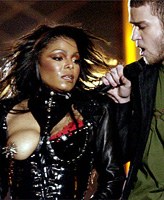 Description of Artwork: For the halftime show, singers Janet Jackson and Justin Timberlake were performing a medley of Timberlake's hits when, as a part of the dance routine, Timberlake ripped off a part of Jackson's bustier, revealing her right breast with a nipple ornament. The shot was only held for about a half a second, before the camera cut to an aerial shot of the stadium. The artists would later go on to infamously term the incident as an accidental "wardrobe malfunction," although there is some speculation as to whether this is true.

The Incident: After the Super Bowl aired, the Parents Television Council publicly condemned the exposure, and organized a letter-writing campaign to the FCC asking that CBS and its affiliate companies be fined. The FCC ultimately levied a $550,000 fine against CBS, which is the maximum amount permissible by law ($27,500 to each of CBS's affiliate companies). CBS appealed the decision, however, and a United States Court of Appeals for the Third Circuit overturned the fine, saying that it was inconsistent with the FCC's longstanding precedent of excusing fleeting obscenities. Furthermore, as the show was not pre-recorded, it was impossible to determine whether the fleeting nudity was intentional or not. [1]

Results of Incident: The effects of Super Bowl XXXVIII's halftime show were felt throughout the entertainment industry. Three major changes, however, are listed here.

Congress passed the Congress Decency Reinforcement Act, which raised the maximum fine the FCC could levy from $27,500 to $325,000. [2] CBS and other networks started adding a 10-second delay to live events, such as award shows and performances. [3] Many shows and networks began to "clean up" their material, in ways varying from the removal of partial nudity from day time soap operas [4] to NASCAR increasing penalties for obscene language and gestures [5].

Of course, drawing a direct link from the halftime show to these incidents is difficult, but the short sequence, and the significant raise in FCC penalties is suggestive.