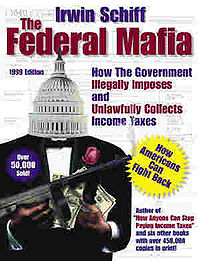 Description of Artwork: Irwin Schiff's book The Federal Mafia which is a telling of his prosecution in the Anti-Tax Movement and how he has become a Pro-Correct-Enforcement fighter.

The Incident: U.S. (IRS) Attorney filed a motion for a temporary injunction in federal court which was granted by one judge George. Basis for the opinion was that Irwin's methods equated to a "plan" or "tax scam". No evidence was presented other than opinion by the attorney, nor were any prossecution witnesses called. Defense witnesses testified that they read the IRC and came to believe as Irwin insists in his material that "no law makes one liable to pay the federal income tax". Witnesses also testified to the fact that THEY did their own research and were not indoctrinated into any sort of plan by buying the book "The Federal Mafia" by Irwin Schiff.

Results of Incident: Judge George issued a permanent injunction against Irwin Schiff and Freedom Books. He is not allowed to sell The Federal Mafia but is allowed to sell most of his other Anti-Tax material. He is appealing and seeking a court of competant jurrisdiction in order to have the blatantly lawless decision of judge George thrown out.