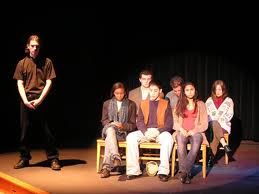 Description of Artwork: Students from Sleepy Hollow High School wanted to stage a production of The Laramie Project. The Laramie Project is a play that explores the killing of Matthew Shepard, a gay student at the University of Wyoming, who was beaten, tied to a fence and left to die on the outskirts of Laramie. After Mr. Shepard's death, members of the Tectonic Theater Project, a group based in New York, traveled to Laramie and interviewed more than 200 people. The edited interviews, as well as the trial testimony of the two men convicted of Mr. Shepard's murder, were distilled into the script.

The Incident: Students from Sleepy Hollow High Schools Gay-Straight Alliance considered the play's message powerful and wanted to stage a production. But high schools are not independent theaters, and the students soon found themselves negotiating with the principal about the use of profanity in the play. The principle stated that it was the profanity, not the play's subject matter, that clashed with the school's generally accepted standards.

Results of Incident: The students worked with a teacher to come up with an edited version of The Laramie Project. While they were in the midst of trying to find a school site for the production (the high school auditorium was under construction) a staff member at the Jacob Burns Film Center in Pleasantville heard about the student's efforts. The center was presenting its "Out at the Movies" lesbian, gay, bisexual and transgender film series, so it seemed fitting to offer the theater for a reading. The students presented their reading at the film center on May 23, 2007 in a production that was not formally affiliated with the school. Still, the audience was filled with Sleepy Hollow students and parents.