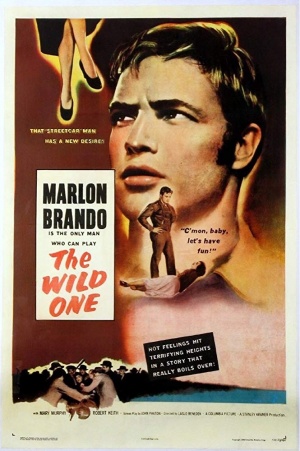 Description of Artwork: "Marlon Brando turns in a tremendously powerful performance as the inarticulate, frozen-faced, truculent outlaw who heads the gang of motorcycle hoodlums."

"Cop-hating Johnny Strabler is recounting the fateful events that led up to the "whole mess" as he calls it, his role in the mess and whether he could have stopped it from happening. The Black Rebels, a motorcycle gang of which Johnny is the leader, cause a ruckus using intimidation wherever they go, with their actions bordering on the unlawful. On the day of the mess, they invade a motorcycle racing event, at which they cause a general disturbance culminating with one of the gang members stealing a second place trophy to give to Johnny. Despite not being the larger winning trophy, it symbolizes to Johnny his leadership within the group. " - IMBD

The Incident: "Memphians couldn't see Marlon Brando in the 1954 classic The Wild One because Binford considered it rowdy, unlawful, and raw."

Results of Incident: Banned in Memphis