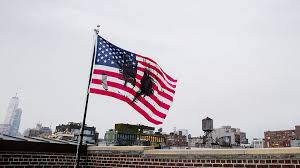 Description of Artwork: Untitled (Flag 2) is a piece of public art by the German-born, New York-based artist Josephine Meckseper. Her work is characterized by employing commercial forms of presentation to display the growing influence of consumer culture on contemporary society. The flag was commissioned by Creative Time through the project "Pledges of Allegiance", which aimed to encourage a sense of community among cultural institutions, in response to the current political climate.

The artwork is a collage, containing an image of the United States divided in two, which the artist stated is a reflection of the "deeply polarized country in which a president has openly bragged about harassing women and is withdrawing from the Kyoto protocol and UN Human Rights Council" (Meckseper, July 2018). Also, the black and white stripped sock is symbolic of the "recent imprisonment of immigrant children at the border".

Untitled (Flag 2) was installed as a public artwork at The Commons in the University of Kansas (KU).

The Incident: The flag sparked controversy, which prompted Kansas Governor Jeff Colyer and Secretary of State Kris Kobach to pressure officials at KU to remove the artwork, as it was considered a "desecration" of the flag. Consequently, KU’s Chancellor Douglas A. Girod relocated the installation to an indoor space, the Spencer Museum of Art due to "public safety concerns".

The National Coalition Against Censorship (NCAC), the Foundation for Individual Rights in Education (FIRE) and the American Civil Liberties Union (ACLU) of Kansas urged KU and the authorities through letters to cease censorship efforts and to restore the public artwork to its original location. The organizations reiterated the importance and obligation of public institutions to protect the First Amendment rights of its students and faculty. Furthermore, the responsibility of public universities like KU to refrain from viewpoint censorship, as stated by the US Constitution, was highlighted.

Results of Incident: The flag was in the Spencer Museum of Art and was open to museum visitors, but not to public onlookers.