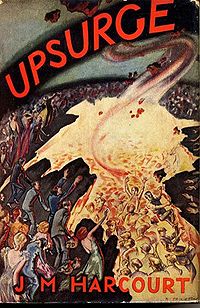 Description of Artwork: Upsurge is a novel, which teaches working class Australians their potential for a social revolution. It also critiques the bourgeois values through lewd sex scenes.

The Incident: In July 1934, a group of detectives removed copies of the novel from a Perth bookstore and requested that further copies be handed in to them. Later in the month, the investigation branch of the Attorney General's Department received complaints about the book from the police. All copies were removed from Perth bookstores and Harcourt had to leave Perth (Where he lived) under threats of prosecution. Other cases involving the removal of the book sprung up in other Australian cities and federal authorities received complaints from numerous organizations that the novel was "Communist propaganda" and filled with obscene sexual content.

Results of Incident: Upsurge was banned in all of Australia in November 1934. The Trade and Customs Department released a report saying that the book was not without merit, but that it was grossly indecent. Upsurge was not republished until 1986