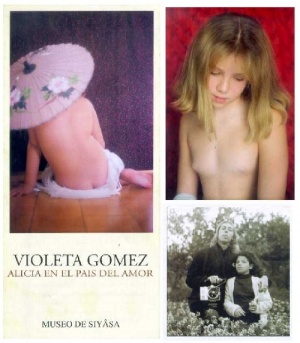 Description of Artwork: Alicia en el pais del amor (Alice in Loveland) is a collection of photographic portraits of children, inspired by the photographic work of Lewis Carroll.

The Incident: In 2001, Violeta Gomez held an exhibition titled Alice in Loveland at the Museo de Siyasa, in Cieza (Spain). It consisted of a series of photographs of female children (aged 7 to 10), most of which had been previously exhibited at the near town of Molina de Segura a few months before. Some of the pictures featured nude or semi-nude children.

After 20 days, the exhibition was prematurely closed by the Town Hall authorities (owners of the museum) as a result of pressure by Judge Concepcion Ferrer following a report from a Spanish Army officer belonging to the Guardia Civil corps. Immediately after, the judge confiscated all the photographs and ordered a raid at Gomez's house, seizing all her prints and negatives, the exhibitions' leaflets, as well as her literary works, videotapes and some art books by well-known photographers such as Irina Ionescu or Yoji Ishikawa.

Gomez was charged with corruption of minors.

Results of Incident: Gomez was not informed about the case development until March 2002, when only the videotapes (mostly movies recorded from the TV) were returned to her. In October 2003 a new judge closed the procedure for lack of any evidence to support the charges in a court. In February 2004 Gomez received notification that the case had ended and her works and belongings were returned some days after. However, some pictures of the exhibition had major damages and many articles were lost: among them, some negatives and prints and the exhibitions' leaflets.