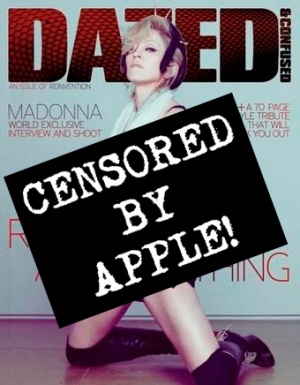 Description of Artwork: Many art and fashion magazines contain nudity or revealing clothing as a form of artistic expression. In 2010, the Apple App Store instituted a “no-nipple” policy, directly affecting magazines sold on the store. This policy upheld Apple’s desire to remain a family-friendly company and not to feature pornography, adult content, or nudity. However, it also limited art and fashion magazines like Dazed and Confused, Vice, and Cosmopolitan.

The Incident: Apples Newsstand feature came out in 2010. This application allowed Apple users to download their favorite books and magazines in one place. With the origination of the Newsstand feature came a new set of guidelines. The guidelines were very general. In one section the company stated, “We will reject Apps for any content or behavior that we believe is over the line. What line, you ask? Well, as a Supreme Court Justice once said, ‘I’ll know it when I see it’. And we think that you will also know it when you cross it.” This established the company as an omnipotent power over what was allowed on the App Store and specifically caused fashion and art magazines to omit much of the content from the Apple versions of their publications. Because of this magazine companies nicknamed their iPad editions the “Iranian versions.”

Results of Incident: Magazines were forced to self-censor, removing images of models that showed nipples or revealed too much skin. If they didn’t submit to this, they risked Apple removing their application from the App Store. However, publishers still tried to push the boundaries of some of their content. For example, Cosmopolitan included cartoon pictures of people having sex accompanied by a detailed description of their position and their physical actions. This supposedly was not removed by Apple because the magazine was clearly for users seventeen and older, was password protected, and did not contain any real-life nudity. Though Apple made a few exceptions, such as allowing The Sun to keep their daily topless model known as the “Page 3 Girl,” most questionable fashion and art content, especially bare-breasted models, was not permitted. Consumers and publishers alike contest Apple’s pressure on them to self-censor because though the world of journalism is shifting to a digital medium, Apple does not allow users to fully utilize their resources and acquire the same material in Apple devices as they would in print magazines.

In present day Apple still pressures publishers to self-censor and exercises the right to remove content that they do not think upholds Apple’s values. Additionally, Apple places ratings and justifications for these ratings of the magazine apps on the App Store. However, these ratings are highly subjective and inconsistent. In 2013 the American versions of Cosmopolitan, Dazed and Confused, and Playboy are categorized as “must be at least 17 years old to download this app.” Whereas magazines like Vanity Fair and Harper’s Bazaar are rated “12+,” though the print versions of these magazines have, in the past, featured nude women on their covers multiple times. And Seventeen Magazine, a magazine whose namesake reveals the audience it targets, is rated a “4+.” Apple does not only censor magazines, but also novels and other applications, and since 2010 they have refused to change this policy.