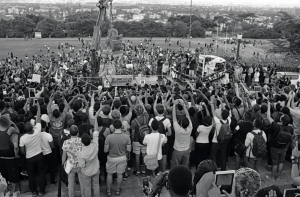 Description of Artwork: The campus of the University of Cape Town is home to a notable collection of art, much of which is controversial. Artists such as renowned South African photographer, David Goldblatt have work exhibited on the campus for all of the students and faculty to see.

The Incident: In 2015, a student threw a bucket of feces onto a statue of Cecil John Rhodes, who was a colonial expansionist who provided the original endowment for the University of Cape Town. Many people regard Rhodes as a symbol that perpetuated the colonial legacy of oppression. The students sparked a movement which they called "Rhodes Must Fall." After much statement and protest from students, the university eventually agreed to take the statue down about a month later. This sparked a movement in which students protested for a reduction in annual fee increases and more affordable student accommodations. During the peak of this protest 23 pieces of artwork which celebrated colonialism or had colonialist connotations were taken down and burned by students in a massive bonfire on campus. In response to the protesting students, the university implemented a task force comprised of student representatives and academics who would go around campus and remove art they believed could "recognize or celebrate colonial oppressors and/or be offensive or controversial for the way in which they depict black people." By the end of 2015, 75 pieces of art were removed from the buildings on campus.

Results of Incident: This action taken by the university was disturbing and upsetting to many individuals, especially South African artist David Goldblatt. Goldblatt had agreed to donate his body of work to The University of Cape Town subsequent to his death, but the action taken by the university in the face of adversity regarding controversial art motivated him to house his archive at Yale University in New Haven. He felt censored by the University of Cape Town and did not want his art to be further censored. He felt that Yale would be a better suited institution to deal with his politically charged work.

‘I Will Not Compromise About My Work’: David Goldblatt on Artistic Freedom, Censorship, and Moving His Archive Out of South Africa, artnet magazine, June 23, 2017