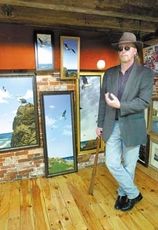 Description of Artwork: Miller, noted primarily as a sports portrait painter, submitted sixteen seascape paintings for his exhibition at the Harbour Gallery. Miller requested that he be allowed to display twenty-three song lyrics with the paintings. Among the rejected songs was Jesus is a Zombie and God is Dead. "God damn" is included in some of the song lyrics.

The Incident: After Adams submitted the lyrics, Carol Adams emailed him to say that eight of the lyrics would not be displayed. The gallery owners claim that the song lyrics have nothing to do with the paintings. Miller feels disrespected and censored. The gallery owners feel they have the right to reject paintings that they do not want to exhibit.

Results of Incident: The gallery exhibied Miller's painting accompanied by the approved lyrics in September of 2005. Miller decided to distribute copies of the eight songs not included in the exhibit outside the gallery.