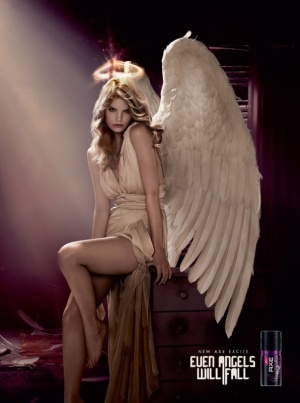 Description of Artwork: Unilever's television advertisement for the "Excite" scent of Axe (known as Lynx in the UK and Australia) deodorant featured attractive female angels crashing down from the sky into an Italian town because they are attracted to an average looking man wearing the deodorant. They lasciviously watch the man while sniffing the air. One by one, the angels smash their halos and advance towards him. At the end of the commercial, a voice-over says, "Excite, the new fragrance from Axe. Even angels will fall."

The Incident: A viewer complained to South Africa's Advertising Standards Authority (ASA) that the suggestion of God's messengers literally falling for a mortal being because of a deodorant was incompatible with his belief as a Christian.

Results of Incident: The ASA agreed with the complaint, and ordered Unilver to withdraw the advertisement and issued the following statement; "The problem is not so much that angels are used in the commercial, but rather that the angels are seen to forfeit, or perhaps forego their heavenly status for mortal desires. This is something that would likely offend Christians in the same manner as it offended the complainant." The advertisement was not televised in South Africa.