Let's Play Armageddon, by Mear One 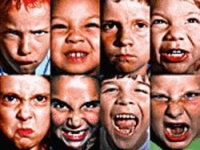 Description of Artwork: All of the artwork included here was deemed to be too Anti-Bush: Jim Budde's ceramic piece "Con Tex or Roll Out the Barrel"; Peter Kuper's "Richie Bush" a cartoon which features George W. Bush standing atop a pile of money dripping with oil; "Bitter Pill," a cooperative piece by David Attyah and S.A. Bachman (an ASU alum), also known as "Think Again"; a photographic installation by Ryan McNamara called "Angry Americans", which features eight photos of children making angry faces placed side-by-side; Jim Conal's "Read My Apocalips," which features a heavily lined picture of President Bush; and Mear One's "Let's Play Armageddon," which features Bush giving a thumbs up in front of a mushroom cloud while holding a paper airplane with the words "Bill of Rights" written on it.

The Incident: ASU had planned to put "Democracy in Action" up as an exhibit to match the timing of a 2004 presidential debate in Phoenix. After curators saw that most of the political art available for display appeared to be anti-Bush in nature (there was only one anti-Kerry artwork), all of the pieces described above were cut from the display, and artistic work that was deemed pro-Bush but "mediocre" was included. [1]

Results of Incident: In spite of pressure from the NCAC, the local media and the artists involved, the pieces remained withdrawn from the display.