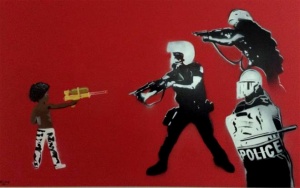 Description of Artwork: “Don’t Shoot” is a painting in acrylic on canvas by 22-year-old artist and Madison native Mike Lroy. It depicts three riot police pointing their guns at a small, toy-gun wielding African-American child.

The Incident: In a joint statement, the Wisconsin Professional Police Association and the Madison Professional Police Officers Association say that while they have “utmost respect for the value of artistic expression and free speech,” they are “deeply troubled” by a piece that “only serves to advance patently negative law enforcement stereotypes.”

The groups did not ask for the painting to be removed; in their statement they say they “find this publicly-sponsored art display both offensive and indicative of terribly poor judgment.”

Results of Incident: The artist responded by saying the painting was intended to provoke discussion. In light of the backlash and criticism, Lroy stood up not only for his piece but for his First Amendment right to freedom of speech. “Art is a positive outlet for expression, emotion and activism,” Lroy wrote in the description accompanying the painting. It is meant “to empower black individuals who are feeling angry, forgotten, and demonized by the mainstream narrative.” (CBLDF, “Don’t Shoot” Painting Incites Controversy from Police Advocacy Groups in Madison, WI)

The library stood behind Lroy and free speech as well in responding to controversy by inviting the police advocacy groups to make their own statement, which would be displayed alongside the piece.