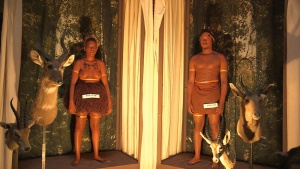 Description of Artwork: Exhibit B critiques the ‘human zoos’ and ethnographic displays that showed Africans as objects of scientific curiosity through the 19th and early 20th centuries, translated here into twelve tableaux, each featuring motionless performers placed in settings drawn from real life. Collectively they confront colonial atrocities committed in Africa, European notions of racial supremacy and the plight of immigrants today.

As spectators walk past the exhibits one-by-one, to the sound of lamentations sung live by a Namibian choir, a human gaze is unexpectedly returned.

The Incident: On Tuesday September 23, on the opening night at the Barbican, up to 200 protesters blockaded the entrance and the road leading to The Vaults gallery theater in London. The protesters argued that Exhibit B is nothing but a replication of the human zoos from the 19th-20th century hiding behind freedom of art. They considered it racist. The journalist and activist Sara Myers started a petition against Exhibit B and collected over 20.000 signatures to shut it down. After these events the Barbican had no choice but to cancel all performances of the piece to ensure the safety of the performers and to end the demonstrations.

Whilst #boycottthehumanzoo acknowledges this victory against racism and white superiority, we also see this is just the beginning. ‘Exhibit B’ revealed that the art industry is riddled with white privilege and elitism, the very issues the exhibit was said to challenge. Our observations during the course of the campaign will be the driving force behind a fresh movement to defeat the white supremacist ideals of Barbican and similar arts institutions to ensure that the next generation of young Black Britons will have equal access to and equal success within the art industry as their white counterparts."

Brett Baileys statement: "I stand against any action that calls for the censoring of creative work or the silencing of divergent views, except those where hatred is the intention. The intention of EXHIBIT B is never hatred, never fear, never prejudice," he said. "It has not been my intention to alienate people with this work. To challenge perceptions and histories, yes. Explicitly to offend: no. Do any of us really want to live in a society in which expression is suppressed, banned, silenced, denied a platform? My work has been shut down today, whose will be closed down tomorrow?"

A spokesperson for the Barbican said: "The Barbican has done everything we can to ensure London performances can go ahead – including continued dialogue with protestors and senior Barbican staff meeting with the leaders of the campaign and attending a public meeting to discuss the issues raised by the work. We respect people's right to protest but are disappointed that this was not done in a peaceful way as had been previously promised by campaigners."

"We believe this piece should be shown in London and are disturbed at the potential implications this silencing of artists and performers has for freedom of expression."

Results of Incident: The Barbican show was permanently canceled and the Barbican was widely criticized for the cancellation. Brett Bailey told a journalist from Dazeddigital.com that Exhibit B would be shown in Russia, France and Chile and elsewhere.