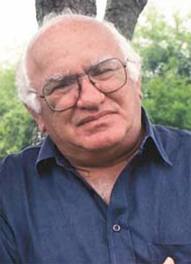 Description of Artwork: Timerman was the editor and publisher of the Buenos Aires newspaper La Opinion. In it, he constantly attacked the Argentine government, military services, secret police, and terrorist gangs. He was a passionate advocate of human rights and social justice.

The Incident: He was arrested on April 15, 1977 and with no charges brought against him, was imprisoned without a trial. He was interrogated about his participation in Zionist organizations, tortured and locked in isolation. During the period surrounding his imprisonment, he was one of twenty to thirty thousand Argentines that disappeared without a trace.

Results of Incident: After thirty months in prison, and, as a result of a worldwide campaign, he was freed. In September 1979, he was stripped of his Argentine citizenship and expelled from the country. He took refuge in Israel where he lived in Tel Aviv with his family. In 1981 he wrote Prisoner without a name, Cell without a number describing his 30 months of incarceration, torture, and interrogation. In 1984 he returned to Argentina where he resided until his death in 1999.

Source: Timerman, Jacobo, Prisoner without a name, Cell without a number