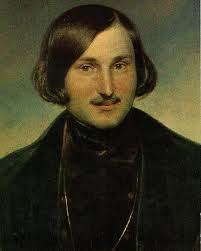 Description of Artwork: Dead Souls is a satirical narrative which Gogol described as an "epic poem". Dead Souls is the story of a young man named Chichikov who is trying to make a name for himself. The title refers to dead serfs whom the landowners have to pay a tax on because they still appear on their records due to the infrequency with which they conducted censuses. Chichikov seeks to buy these "dead souls" in order to falsely inflate his wealth and social standing and then take out a loan against these dead serfs so that he can buy a large house. The story is a satire on Russia's fuedal system, and many of the characters Chichikov encounters in the town are caricatures. Gogol intended for the work to be a modern-day representation of the Inferno from Dante's Divine Comedy, representing Russia's faling economic and social system.

The Incident: Gogol wrote Dead Souls from 1840-1841 while living in Rome. In 1841 he returned to Russia to oversee the publication of the book. Gogol himself was certain that the book would be published without a problem. When he submitted the book to the censors in late 1841, however, the book was deemed unworthy of publication and banned. The Censorship Committee had five objections to the text. The first was Gogol's use of the word soul, which the censors felt violated the church doctrine on the immortality of the soul. Their other objections were to Gogol's blatant attack of the fuedal system, the representation of a criminal as a hero, the cheapening of human life, and certain allusions which they felt were a direct attack on the emperor. Gogol then sent the book to St. Petersburg where he had generated support among other writers. A friend of Gogol's gave Dead Souls to Nikitenko, who was regarded as the most liberal censor. In March of 1842 Nikitenko approved the book, but with about 30 changes in wording required. One of these was the changing of the title to add "Chichikov's Adventures" before the original title. Gogol accepted this but designed the title page so that the first part was in much smaller type. Nikitenko also asked that Gogol revise a subplot called the Story of Captain Kopeikin. After doing so the novel was accepted and was published a month later.

Results of Incident: Gogol's wariness of censors led him to willingly self-censor his future works. A second edition of the book was published in 1846 with an author's preface. Gogol died 10 years after the first publication of Dead Souls and Russian officials did their best to prevent public tributes to him.