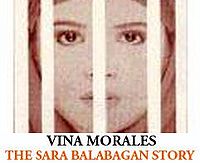 Description of Artwork: The film, Sarah Balabagan Story, is about a Filipina maid who escaped execution for murder in United Arab Emirates in 1994.

The Incident: Officials from the UAE expressed concern for Emirates-Philippino relations and for the safety of the 80,000 Philippinos living in the country if the film is shown. In addition, Muslim groups petitioned the Philippino government to cancel the film's screening. They claimed it was "a disgrace to the high morality of Muslim women."