From Censorpedia
Revision as of 14:50, 8 December 2011 by JonathanF (talk | contribs)
(diff) ← Older revision | Latest revision (diff) | Newer revision → (diff)
Jump to navigation Jump to search
The printable version is no longer supported and may have rendering errors. Please update your browser bookmarks and please use the default browser print function instead. 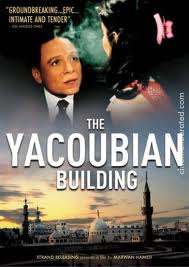 Description of Artwork: The film, Yacoubian Building, depicts the story behind the Yacoubian Building in Cairo. The building was initially constructed as a luxury apartment building but, following the 1952 revolution, its wealthy (primarily foreign) residents fled and military officers and their families moved in. On the roof of the building are small rooms that were initially designed as storage space for the apartments. These storage rooms are now used as apartments for poor migrants from the countryside. Thus, now there is an entire neighborhood on the roof of the once luxury building.