A Child's View From Gaza 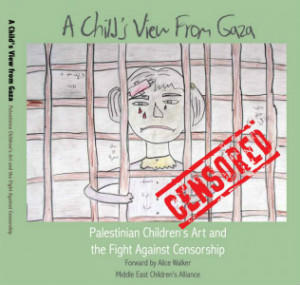 Description of Artwork: The Art Show was to display war time and violent images drawn by Palestinian children during Operation Cast Lead an Israeli military action which involved the occupation of the Gaza Strip during December of 2008 and January of 2009. The Military action led to the death of 1,400 Palestinians including over 300 children. The art work contained violent images of the action including dead soldiers, men, women and children and was deemed over all pro-Palestinian, which was expected as the children were all Palestinian.

The Incident: On September 9, 2011 the Board of Directors of the Oakland Children's Museum cancelled it's planned exhibition of art work by Palestinian children during Operation Cast Lead. The Museum cited that the work was overall too violent to be shown in a museum that was oriented towards children and pulled the plug. The Museum cited that community concerns about the “violent” nature of the images was the reasoning behind the abandonment of the showcase. However, the images depicted in the art exhibit drawn by Palestinian children generally decried the use of violence but did so through violent imagery. The community pressure came from the Jewish Community Relations Council and the Jewish Federation of the East Bay both of whom cited that the art work was Pro-Palestinian and created an unfair representation of the Operation Cast Lead implying that Israel's actions were uncalled for and violent on an unarmed civilian population.

Results of Incident: The Museum received a letter from the Middle East Children's Alliance (MECA), along with thousands more from supporters around the country, requesting that they reverse their decision by Thursday, September 15.The Museum declined to reverse the decision citing that it was the violence and not the pressure from Israeli support groups that caused the work to be removed. Despite this MECA argued that the Museum itself has previously presented wartime artwork, including drawings by Iraqi children that show U.S. tanks and weaponry, as well as another exhibit of World War II imagery. “It is very sad that the children artists in Gaza have been forced to live under siege by Israel since 2006. By silencing these Palestinian children, the pro-Israel groups succeeded to stretch the siege from Gaza to Oakland,” said Ziad Abbas, Associate Director of MECA.

UPDATE (9/28/2011): On the scheduled opening day, MECA placed facsimiles of the work outside of the MOCHA, but a half an hour into the show, it was announced that the show itself was on display in a venue around the corner. The show was on display until November 30th.