A Mouthful of Sperm 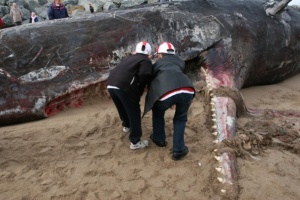 Description of Artwork: Byford submitted a series of photographic works for the annual SO Festival in Lincolnshire. The image of two children peering into the insides of a sperm whale's mouth was targeted for its title's "strong sexual connotations": "A Mouthful of Sperm".

The Incident: The East Lindsey Council, as well as the festival director, requested that the work be removed from its display location. Claiming that the photograph would not be suitable for a "family audience", the authorities refused to allow the work to remain in place for the festival.

Results of Incident: As a response to this gesture, the artist, John Byford, chose to withdraw the entirety of his work from the show.