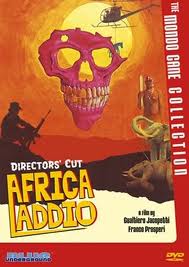 Description of Artwork: Africa addio is a documentary film on the conflicts and rebellions of the African continent. Jacopetti describes his efforts in making the film as attempting to interpret it with objectivity. However, the movie fails to address apartheid in South Africa.

The Incident: Although Africa addio won awards in Italy, African and some European governments considered the film racist and had it banned.

South Africa, however, screened the film under special "Europeans only" restrictions. They also removed scenes of Africans being killed and of any discussion of the future of South Africa. The government saw this as a propaganda tool to enforce the idea that South Africa would be ruined if it fell into the hands of black people.

Results of Incident: After the Soweto uprising in 1976, the film was released again in South Africa. Despite liberal critics recognizing the use of the movie as propaganda, it continued to be shown and was once again restricted to white people.