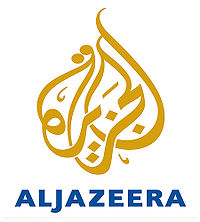 Description of Artwork: Al Jazeera is a top-rated television station in the Middle East. It is known for its concise coverage of pan-Arab issues.

The Incident: Al Jazeera, along with another Iraqi TV station, al Arabiya, aired footage of hooded men threatening to kill members of the U.S. appointed Iraqi governing council. The U.S. State Department called this, "irresponsible in the extreme." On 24 November, 2003, al Arabiya aired an audio tape reportedly made by Saddam Hussein, which Defense Secretary Donald Rumsfeld called, "openly hostile to America." It must be noted that in a poll taken in the Middle East, 63% of the population prefer either al Jazeera or al Arabiya to other news stations.

Results of Incident: The governing council banned the two stations from reporting in Iraq for several weeks.