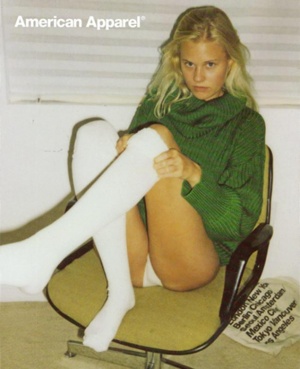 Description of Artwork: The advertisement features a young blonde woman sitting in an office chair wearing white knee high socks, an oversized green sweater, and white underwear. It does not contain any nudity.

The Incident: The Advertising Standards Authority accused the American Apparel advertisement of sexualizing a girl who appeared to potentially be under the age of sixteen. Because the advertisement, which appeared on the back cover of Vice Magazine, was suggestive and the girl, according to the ASA’s opinion, was not definitively over sixteen, the advertisement was considered offensive and irresponsible. However, at the time the photograph was shot the model was twenty-three. The ASA also stated that because the advertisement was shot in an “amateur style” it had a more intimate quality than more commercial photographs. This was not American Apparel’s first run-in with the ASA. In 2009 American Apparel's advertisement of a young woman, also featured in Vice, was banned by the ASA for the model appearing young and revealing too much skin.

Function of the ASA

The Advertising Standards Authority assists in advertising regulation in the UK. It is independent of government and industry. The ASA bases its regulations off of a code written by the Committee of Advertising Practice. Though the ASA tries to monitor advertisements before they go to print, there is such a vast number of ads that they cannot view them all. Often the ASA takes action after receiving complaints about certain ads. The regulation of advertisements is usually moderated successfully by the ASA before any legislative action is taken, leaving the courts free to deal with other issues.

The Advertising Code and Children

Section 5 of CAP’s Non-Broadcasting Advertising Code defines a child as someone under sixteen. In 5.2 this Code states that “Marketing communications addressed to, targeted directly at, or featuring children must not exploit their credulity, loyalty, vulnerability, or lack of experience.” Using ideas about children and advertising, the ASA asserted that American Apparel’s ad had “sexual undertones and a voyeuristic quality” and that “the ad inappropriately sexualized a model who appeared to be a child and was therefore irresponsible.”

Results of Incident: After the ASA warned American Apparel of the unacceptable sexualized content of the ad, American Apparel stopped using in. However, they did not agree with the assertions. They said that they would “not be altering [their] classic advertising aesthetic which is internationally recognized for its artistic and social values.”