An actor rehearsing the interior monologue of Icarus (painting) 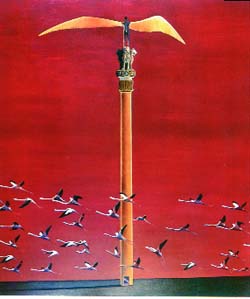 Description of Artwork: The painting, entitled An actor rehearsing the interior monologue of Icarus, depicted a naked Icarus, the Greek mythological figure, on top of the Ashoka Pillar. It was part of an exhibition by 25 young Indian artists entitled Combined Voice for the New Century.

The Ashoka Pillar dates back to the reign of Emperor Ashoka, who ruled India from 273 - 232 B.C.E., and depicts four lions mounted on a circular abacus with a wheel at its centre. It was adopted as India's national emblem following the end of British rule in 1947.

The Incident: Two days before the exhibition was scheduled to open, Culture Ministry Secretary P. V. Vaidynatha Ayyar instructed NGMA director Mukta Nidhi Samnotra to remove the painting from the exhibition, claiming the national emblem had been portrayed in a less than reverential manner and could prompt objections from nationalist elements.

Samnotra, with no background in art and an appointee of the BJP-led National Democratic Alliance government, agreed with the directive. She said she would also remove a fabric drawing of nude women by Rekha Rodwittiya, Nair's companion, and work by sculptor Rejendar Tikku.

Results of Incident: When exhibition curator, Prima Kurion, and organiser, Amit Gupta, objected and asked Samnotra to reconsider her decision, the NGMA director threatened to personally remove the art works. Outraged over this blatant attack on artistic freedom, all the artists involved in the exhibition withdrew their works in protest.