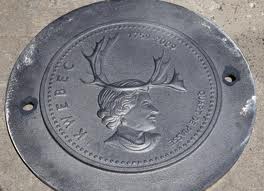 Description of Artwork: A cast-iron manhole cover which fuses both faces of the Canadian 25-cent piece, resulting in an image of Britian's Queen Elizabeth II with Caribou antlers on her head, instead of a traditional crown.

The Incident: The artwork was commissioned for public display to celebrate the 400th anniversary of the founding of Quebec. The sponsoring foundry, Bibby, refused to cast the work. The artist found another foundry to cast the work, at his expense. However, given the contentious history between the Queen and the Quebecoises, authorities thought the work might convey too much political criticism. They declined to display the piece.

Results of Incident: Quebec's spokeswoman, Isabelle Petit, said: "I think censorship is a strong word, but it's true that the subject of the art work is sensitive and you have to be careful when you play in diplomatic spheres." Mr. Bureau expressed disappointment that discussing the queen and British colonization of Quebec is so taboo. He said the work should be considered ironic and was not meant to make a fool of the queen of England.