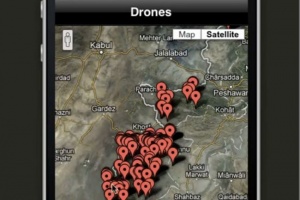 Description of Artwork: Drone+ is an application that places a location pin on an interactive map when a U.S. drone strike occurs. The app shows no photos or depictions of violence and carnage, only a photo of a map. The information from Drone+ is publically available through the United Kingdom’s Bureau of Investigative Journalism. Users are able to click on the pin of a specific drone attack and scroll through the links of various media reports, along with the presumed target of the attack.

The Incident: Apple rejected the application as it was found to be “objectionable and crude” in the fall of 2012. The app was rejected multiple times; being deemed “not useful”, an issue with the Google corporate logo, and finally it was rejected for containing content that was “objectionable and crude”. Drone+ contains content and design similar to an interactive app available on the Guardian’s web site and iOS app, although the Guardian contains other types of content, while Drone+ solely is to notify users of U.S. drone strikes.

Results of Incident: Apple’s rejection of the Drone+ app was covered by various news and media sources. The developer, Begley, attempted to adjust the app for the iOS app store after each rejection, yet Drone+ was continually rejected. It has been widely noted that Apple has received lucrative contracts with the U.S. Department of Defense. Apple has reversed the rejection decisions over many Apps after receiving public backlash and negative publicity, but Drone+ is still unavailable through the App Store.