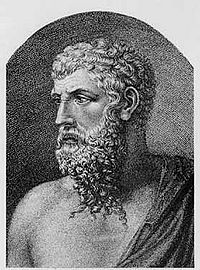 Description of Artwork: The Clouds 423 B.C.: Comedy, an attack on the 'modern' education and morals as imported and taught by Sophists. in this play Socrates and his pupils are ridiculed, and at the end of it, their school, the Phrontisterion (thinking school) is burned to the ground. Socrates is pilloried as a typical representative of impious and destructive speculations.

The Birds 414 B.C.: Comedy of fantasy. Some scholars see it as a political satire on the imperialistic dreams that had led the Athenians to undertake their ill-starred expedition of 415 B.C. against Syracuse Sicily.

Lysistrata 411 B.C. Play depicting the seizure of Acropolis and of the treasury of Athens.

The Incident: A.D. 66 His comedies were considered obscene by Plutarch

1930 United States : Customs ban lifted on Lysistrata. During the period of prohibition the book was published and sold for as little as thirty-five cents; and the drama was played in New York and Philadelphia as adapted by Gilbert Seldes.

1954 United States : Post Office officials seized a copy of the 1926 translation of Lysistrata, by Jack Lindsay, addressed by Fanfrolico Press, England, to Harry A. Levinson, Beverly Hills bookseller. The Post Office quickly reversed itself and delivered the book, but only because it was "not for general distribution".

1967 Athens, Greece : The military clique then ruling the country banned a number of classic plays, including those named above, presumably because of their independent and antiwar themes.

Results of Incident: 1955 United States : In a successful challenge of the Comstock Act of 1873 which empowered the Postmaster General to rule on obscenity of literature sent through the mail, Lysistrata was declared mailable.