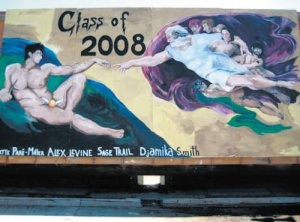 Description of Artwork: Every year, Ashland high school seniors are asked to paint a mural to celebrate their outgoing class; the mural in question here was the class of 2008's contribution. The content itself mirrored Michelangelo's painting on the ceiling of he Sistine Chapel, The Creation of Adam, only the figures in it were replaced by characters from J.K. Rowling's popular Harry Potter series. Adam was replaced by Harry, God was replaced by Dumbledore, and the cherubs surrounding God were replaced by the faces of various other characters in the series. Harry, like Adam in the original painting, is nude, but a "golden snitch," which is a ball used in a popular sport in the series, covering Harry/Adam's genitalia. The ball in the mural was about the size of a baseball, although it is described as the size of a walnut in the series.

A sketch for the mural had been approved by a student committee as well as Ashland's principal, Jeff Schlecht, although he asked for a larger snitch.

The Incident: Within hours of the four-panel mural being put in place overlooking the quad, principal Schlecht ordered the panel which contained the image of Harry/Adam to be taken down. Schlecht cited a school policy against "excessive bareness" as the reason for his decision.

Results of Incident: After hundreds of students protested the censorship, multiple meetings between the artists and the faculty, and a letter of complaint from NCAC, the offending panel was replaced, only with a larger, soccer ball-sized golden snitch painted over the first one.