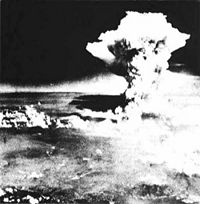 The atomic bomb explosion at Hiroshima

Confronting Bodies: The Supreme Commander for the Allied Powers (SCAP), the Detachment of Civil Censorship in occupied Japan.

Description of Artwork: Information that showed the social, infrastructural and medical aftermath of the atomic bombs used on Hiroshima and Nagasaki during World War II.

The Incident: The United States' occupation forces censored information that described the consequences of the atom bombs throughout the occupation of Japan, from 1945-1952. The newspaper, Asashi Shimbun, was cancelled after it accused the U.S. of war crimes by using the bombs. Domei, the central news agency supported by the U.S. occupiers, was suspended for suggesting that only "barbarians" would use such weapons. The books Nagasaki no Kane (Bell of Nagasaki) and Masako Taorezu (Masako Does Not Collapse), that described the explosion and results of the blast, were banned from publication. In addition, doctors were forbidden from publishing medical material about the effects of the bomb.

Results of Incident: In April 1952, the first pictures of the bombs' aftermath were released in the magazine, Asashi Gurafu. The books, Nagasaki no Kane and Masako Taorezu were published in 1949.