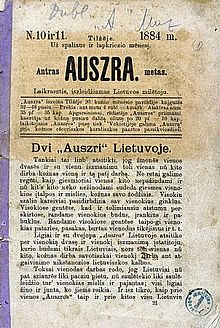 Description of Artwork: Any publication written in the Latin alphabet, specifically the newspaper, Ausra, which printed social, cultural and historical stories.

The Incident: During the 1880s Russia tightened control of its imperial holdings in Eastern Europe. One of its edicts was the abolition of the Latin alphabet. As a result, the newspaper, Ausra (Dawn), began publishing clandestinely in Prussia. Members of the Lithuanian community smuggled it across the German-Lithuanian border, risking significant prison sentences. Russia feared it could incite nationalist movements throughout the empire by uniting nations that were denied their native languages, such as Ukraine, Belarus, Armenia and Georgia.

Results of Incident: Although it was never free to publish in Lithuania, Ausra evolved into the periodical, Varpas, that played a major role in Lithuanian independence, eventually won in 1918.