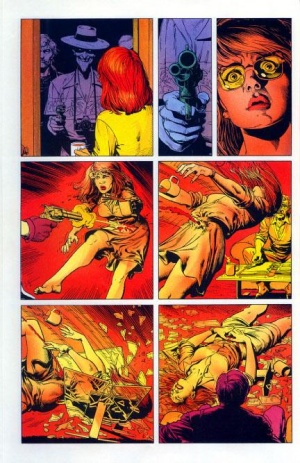 Description of Artwork: Batman: The Killing Joke is a one-shot superhero graphic novel written by renowned author Alan Moore and drawn by Brian Bolland. Among other reasons, it is notable for involving one of the most brutal portrayals of iconic Batman villain The Joker, who shoots Barbara Gordon (aka Batgirl) through the spine, paralyzing her. He then proceeds to take photographs of her nude injured body, and torture her father James Gordon in an attempt to drive him insane.

The Incident: A patron of the library filed a complaint demanding that the book reviewed from the shelves, claiming that the work was "very adult" and "advocates rape and violence".

Results of Incident: The library's board disagreed, voting 3-0 (two members being absent) in favor of retaining the book. They contend that many prose books and comics depict violence, and that the patron’s interpretation of rape was “misconstrued.” The book is currently shelved in the young adult section of the library with several other graphic novels. Ellyson notes that the review board consistently denies material challenges posed in the community, ensuring the availability of materials for patrons.