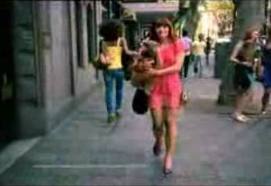 Description of Artwork: The Kotex advertisement, features a woman and her pet beaver eating lunch, having their nails done, at the hairdresser, and being gawked at by men on a beach.

The ad ends with a voice-over: "You've only got one. So for the ultimate care down there, make it U." The woman then hands a packet of Kotex tampons to the beaver as a gift.

The Incident: The Advertising Standards Bureau in Canberra received a "large number" of complaints as soon as the ad aired on Sunday - the day after International Women's Day.

"A large number of complaints have come in over the weekend," ASB chief Alison Abernethy said.

Results of Incident: The Kotex advertisement has been rated M and will broadcast only after 8.30pm